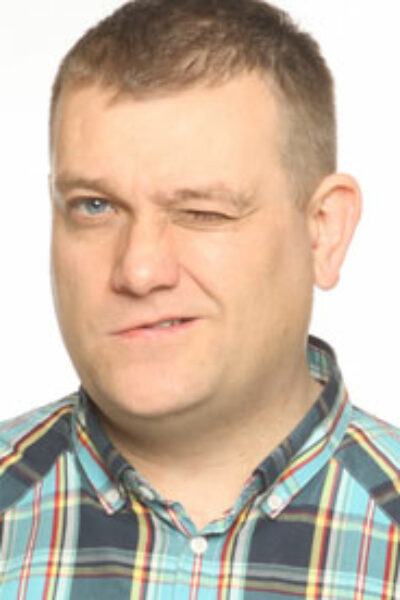 Gavin Webster is an award winning and legendary comedian from the North East of England. After making his modest debut in a pub in Gateshead in February 1993, on the same bill as Ross Noble he’s done over seven thousand gigs performing all over the world including Abu Dhabi, Australia, Hong Kong, Dubai, Bahrain, Qatar, Singapore & Malaysia.

Famed and respected by his peers for his uncompromising and unusual approach and distinctly original routines, he now boasts a large cult following round the country. Gavin has also supported some of the biggest household names on tour including Kevin Bridges, Alexi Sayle, Lee Evans, Jack Dee and Phill Jupitus.

In 2014, he was named UK Circuit Comedian of the Year, as voted for by fellow professional comedians online.

He has also become a cult hero at the Edinburgh Fringe having performed an amazing ten solos shows over his career including his 2011 show All Young People are Cunts which was positively reviewed by the British Comedy Guide. In 2012 he returned to the Edinburgh Fringe with a new stand-up show Bill Hicks Wasn’t Very Good. His 2014 show was called Controversial Title in Order to Sell Tickets whilst his 2016 show was entitled Jesus Christ Is A Window Cleaner Now.

In 2016 Gavin made his big screen debut in Ken Loach’s multi-award winning film I, Daniel Blake.

“Funny, clever and as brilliantly observed as you’ll find”The Scotsman.

“Like a cross between Bill Hicks and Geoff off Byker Grove” Ross Noble.

“The best thing to come out of Newcastle since deep fried Mars bars” The Source.

“His daftness is little short of surreal genius” The Stage.