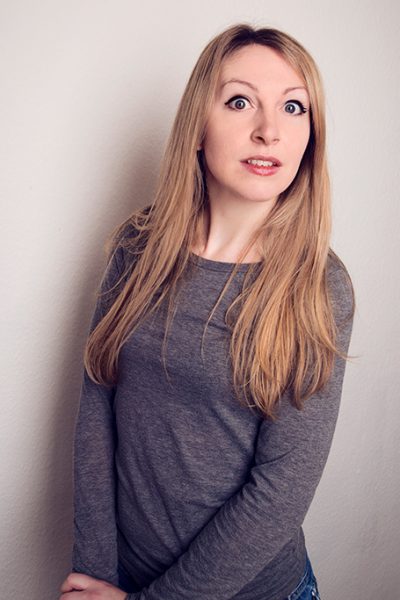 Jenny moved from the Welsh mountains to the Big Smoke and embarked upon a career in stand up comedy. Highlight: Appearing on a BBC Radio Wales panel show with Jo Brand. Low point: After a gig, an audience member saying ‘You should be a stripper’ (Both secretly highlights).

She has written for BBC Radio 4’s The News Quiz, Huffington Post and Glamour Magazine and has traveled (parts of) the world with her comedy. She has performed in Hong Kong, Philippines, Singapore, Switzerland and Australia where she won the Percy Award for most tickets sold in “The
Imaginarium”, (over 1900 tickets) during the Adelaide Fringe.

In August 2016 she performed her debut hour at the Edinburgh Fringe, ‘Jen-Hur’ which received reviews such as ‘★★★★★ An Excellent comedic work’ – Edfest Mag and ‘★★★★ A brilliant show and well worth a watch’ – Arts Award Voice.

In August 2017 she performed ‘Fantastic Beasts and Where to Find Jen’ at the Edinburgh Fringe which was described as ‘Joyously liberating’ by The List. She was then invited to perform the show in Barcelona and Sitges where she performed to lovely sold out rooms and learnt a bit of Spanish.

This Summer she went to Edinburgh Fringe with her show ‘A Few Good Jen’. She performed to a full room everyday and received lots of lovely audience reviews including ‘One hour of the purest, most perfectly crafted and delivered stand-up comedy’, ‘occasionally disgusting’ and ‘Hilarious.’